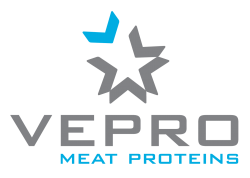 The meat industry has been put to a challenge since the European Food Safety Authority (EFSA) has stated that it will reduce the maximum levels of phosphates in meat preparations. In search of a replacement of phosphates, PhD Bart Heyman (Veos group), conducted research to replace phosphates by Vepro® functional meat proteins.

Phosphates (P2O5) are a commonly used additive in a variety of meat preparations. The main goal is to improve the waterholding and emulsifying capacity of the meat. This results in alteration of the proteins which influence the structure and texture of meat. However more and more research is done to replace phosphates as they have negative health impact.

At our meat pilot plant we made several frankfurters sausages with plasma proteins and phosphates to confirm if plasma proteins can be replaced by P2O5. The frankfurters with plasma were compared to their respective controls by determining the composition, water holding capacity, cooking losses, texture, microstructure, sensorial characteristics and overall acceptance.

The conclusion was that no significant differences were found in proximate analysis, WHC and cooking losses. The inclusion of 0,8 % Vepro 75 PSC certainly can help you to produce a phosphate free cooked sausage.

Back to all cases

This website uses cookies to improve your experience while you navigate through the website. Out of these cookies, the cookies that are categorized as necessary are stored on your browser as they are essential for the working of basic functionalities of the website. We also use third-party cookies that help us analyze and understand how you use this website. These cookies will be stored in your browser only with your consent. You also have the option to opt-out of these cookies. But opting out of some of these cookies may have an effect on your browsing experience.
Necessary Altijd ingeschakeld
Necessary cookies are absolutely essential for the website to function properly. This category only includes cookies that ensures basic functionalities and security features of the website. These cookies do not store any personal information.
Non-necessary
Any cookies that may not be particularly necessary for the website to function and is used specifically to collect user personal data via analytics, ads, other embedded contents are termed as non-necessary cookies. It is mandatory to procure user consent prior to running these cookies on your website.
OPSLAAN & ACCEPTEREN